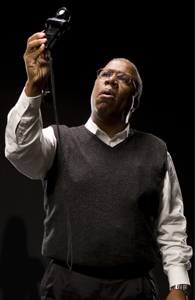 Bill Dill remembers the exact moment when "the world stopped spinning." At a photo exhibition by Walker Evans, Dill stood with a tear running down his face at the sight of a photo of an organ in a church in West Virginia. It was the moment when Dill began to pursue his interest in photography full-time.

Thus began a career running the gamut from music videos to feature films. His work won local Emmys for news. He did work for A.T.T., the U.S. Marines, and Apple. He shot television shows for Paramount and HBO, and features, including Sidewalk Stories, that won the Prix Public in Cannes. He was elected to the prestigious American Society of Cinematographers (ASC)—the preeminent mark of recognition is his field.

But he also walked away from jobs and projects requiring that he shoot gory auto accidents for TV news or work on "insulting scripts" or make one more beer commercial. As a professor of cinematography, he asks his students to follow the same path—to seek excellence, to pursue their work with a level of intensity that demands that they "eat, drink, breathe and sleep cinematography," and to seek to produce images that stop the world.

I traveled to Light Iron Post Production in New York City and spent a week there supervising color grading on the feature film Zana to prepare it for screening at the Toronto Film Festival September 7-9. I have a single card title on the film as Creative Consultant.
I attended the world premiere of the feature film Zana at the Toronto International Film Festival. I received the credit as a Creative Consultant on the film. https://www.imdb.com/title/tt6463320/
I attended the screenings of the Feature Film Zana at the Palm Springs International Film Festival.
I am now the Lynda.com author for cinematography and visual storytelling. I participated in a lengthy series of training sessions and recordings, as writer and on camera talent. The objective for them is to go beyond Lynda.com's current concentration on technical tutorials and to move into the area of teaching the fundamentals of making creative decisions in filmmaking. This is their first effort in teaching of this sort. In fact, I don't believe there is another comparable effort online anywhere. I will be working with a content manger, producer and a director to produce a variety of online content. My goal is to use these online courses to augment my teaching at Dodge and to learn vital skills in the important area of online teaching. Lynda.com is the world leader in online instruction in the field of film and video. This is an excellent opportunity for me to learn from their expertise in this area. Lynda.com was recently purchased by LinkedIn, so they have lots of resources to draw upon.. This is a great opportunity for my Dodge students. Every Dodge student automatically has a Lynda.com membership. This means that my courses there are accessible to them and I will be using them to enhance the courses I teach at Dodge. The expense of all of this is covered by Lynda.com. The first of two courses has been completed and goes live on the Lynda.com site 9/29/16. Rather than adding my courses to their FOV (Fundamentals of Video) library as previously suggested, Lynda has created a separate library called Cinematography which will contain all of my present and future courses.