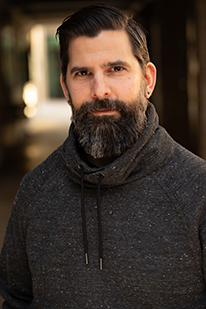 Nick Gabriel is an award-winning theater artist, educator, and administrator. He is the former director of Studio A.C.T. at the American Conservatory Theater, where he conceived and implemented Studio A.C.T.’s curricular and operational revitalization while serving on the associate faculty of A.C.T.’s Master of Fine Arts program. In addition to developing A.C.T.’s Citizen Artistry initiative, he devised curricula for a variety of other programs, including A.C.T.’s world-class outreach program and the San Francisco Semester, an intensive, collegiate study-away program. He is a former theater arts curriculum assessor for the New York State Education Department and a recipient of the Teachers 4 Social Justice Award.

As an A.C.T. Resident Artist, Gabriel played many principal roles in mainstage productions, including Clov in ENDGAME opposite Tony Award-winner Bill Irwin, and Nihad in SCORCHED starring Emmy Award-winner David Strathairn. At La Jolla Playhouse he played Zhao Dun in THE ORPHAN OF ZHAO starring Tony Award- winner B.D. Wong, and at Laguna Playhouse he played Dr. Lyman Sanderson in HARVEY starring Emmy Award-nominee French Stewart. He has also played principal roles in mainstage productions at some of the country’s other major venues such as Milwaukee Rep, the California Shakespeare Theater, New York’s Town Hall, South Coast Rep, and the Guthrie. In addition to his work in the classics, Gabriel has originated roles in multiple world premieres. He has danced numerous character roles with the Berkshire Ballet and performed principal singing and speaking roles with the San Francisco Symphony, where he played the Soldier in A SOLDIER'S TALE alongside Grammy Award-winner Elvis Costello and Academy Award-winner Malcolm McDowell. In 2018, Gabriel facilitated a partnership with Laguna Playhouse that enabled six Chapman University students to perform in the ensemble of THE GRADUATE, starring Golden Globe-winner Melanie Griffith.

He is a Ten Chimney’s Foundation Lunt-Fontanne Fellow and has received numerous Bay Area Critics Circle Award nominations and wins. In 2011, The Huffington Post named him the second most-valuable contributor to the Cultural Landscape of the San Francisco Bay Area. He is a Certified Practitioner of the Michael Chekhov Technique, a Dueling Arts International Certified Theatrical Combatant, and was selected to be among the inaugural participants in Theatrical Intimacy Education’s Educator Advocate Program. He received a BFA in musical theater from the University of Michigan and an MFA in acting from A.C.T.