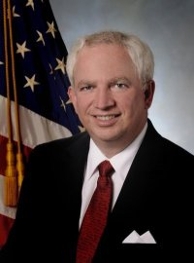 Dr. John C. Eastman is the Henry Salvatori Professor of Law & Community Service at Chapman University Fowler School of Law, and also served as the School's Dean from June 2007 to January 2010, when he stepped down to pursue a bid for California Attorney General. Professor Eastman is also affiliated with the Claremont Institute as a Senior Fellow and Director of the Institute’s Center for Constitutional Jurisprudence, which sponsors Chapman’s constitutional jurisprudence clinic.. Prior to joining the Fowler School of Law faculty in August 1999, he served as a law clerk with Justice Clarence Thomas at the Supreme Court of the United States and with Judge J. Michael Luttig at the United States Court of Appeals for the Fourth Circuit. After his clerkships, Dr. Eastman practiced with the national law firm of Kirkland & Ellis, specializing in major civil and constitutional litigation at both the trial and appellate levels. He earned his JD from the University of Chicago Law School, where he graduated with high honors in 1995. He was selected for membership in the Order of the Coif and was a member of the Law Review, a Bradley Fellow for Research in Constitutional History and an Olin Fellow in Law & Economics. Dr. Eastman also has a Ph.D. and M.A. in Government from the Claremont Graduate School, with fields of concentration in Political Philosophy, American Government, Constitutional Law, and International Relations. He has a B.A. in Politics and Economics from the University of Dallas. Prior to law school, he served as the Director of Congressional & Public Affairs at the United States Commission on Civil Rights during the Reagan administration and was the 1990 Republican Nominee for Congress in California's 34th District.