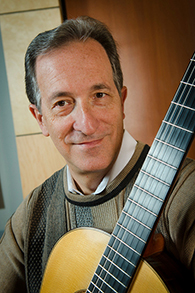 While still a student at California State University at Northridge, Jeffrey Cogan, M.A., was honored by being invited to perform for the great Spanish Maestro of the guitar, Andres Segovia.  After finishing his studies, he built a career in performing and teaching the guitar at CSUN and at Chapman University.

Mr. Cogan has performed around the USA and Europe.  In 1998, Cogan was invited to Perigueux, France, to perform and teach at the Ecole Brittain with the acclaimed French guitarist Olivier Chassain.  In 1999, Mr. Cogan performed works as diverse as the lute part of the St. John Passion with the William Hall Master Chorale and the contemporary jazz guitar in Fred Katz's Concerto for Buddy at the West Coast Jazz II festival in Newport Beach. California.

During the spring and summer of 2004, Mr. Cogan was invited to adjudicate different competitions in Austria and France.  He was also a featured performer in the Fabritio Caroso guitar festival in Lanuvio, Italy. In the summer of 2005 Mr. Cogan performed a concert for the VIII Festival De Musica De Guitarra, "Villa de Aranda" in Aranda de Duero, Spain.

In March of 2009, Chapman University Guitar Ensemble members, (under the direction of Jeff Cogan), won top honors in the Brownsville guitar ensemble competition at the University of Texas at Brownsville.  Both the university guitar quartet and the duo won first place in the college division during Chapman's first time participation.  The Chapman University quartet also performed in a master class for the great Romero Family.

In June of 2009 Professor Cogan was honored by the Guitar Foundation of America (GFA) with a Lifetime Achievement Award for service to the organization and his work as director of GFA international guitar competition since 1987.  During his tenure the competition has become one of the most prestigious events of its kind.  This annual competition has been held in 20 different locations since 1983 including New Orleans, Charleston, Montreal, Canada, Merida, Mexico and Quebec City, Canada.  He now serves as a member of the GFA board of trustees.

Mr. Cogan is the president of the Orange County Guitar Circle, a community organization that supports the classical guitar.  The Guitar Circle sponsors guitar concerts by world-renowned artists as well as community members.