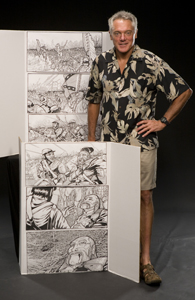 No one would ever see Gil Bettman as the retiring type. Bring Academy Award-winning director Robert Zemeckis to his directing class and Bettman wades right in, challenging his old friend's point of view and sparking a good-natured debate about the best ways to tell a story using a camera. But that's Bettman's style. He has very definite opinions about how to block a camera or talk to actors from his days as a top action director for TV series like The Twilight Zone and Knight Rider. Bettman learned the value of subjecting all film ideas to the acid test of a free-wheeling debate from Zemeckis himself while working as a screenwriter developing projects for Zemeckis at Universal and Warner Brothers. It's a lesson Bettman wants to pass on to his students as well.

With a degree from Harvard (with honors in English Literature), as well as an M.F.A. from UCLA, Bettman has directed a wide range of projects from feature films to music videos and corporate profiles. He recently directed a feature documentary, The Long Road to Cabo, for rock icon Sammy Hagar, and published a textbook, First Time Director, through Michael Wiese Productions.