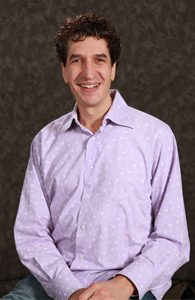 Frank Chindamo comes from a family of teachers and couldn’t imagine doing anything else. He especially loves teaching his students about New Media, because “it’s changing every day. We as a class are on the forefront of shaping this new medium!”
Chindamo founded and runs Fun Little Movies, one of the world's top producers of comedic “Advertainment” videos for the web and TV. They’ve won over 30 awards for their work and been lauded on the front pages of Forbes Magazine, the LA Times, and in the Wall St. Journal, NY Times, CNN, USA Today, etc.
FLM has made videos and video series for numerous brands. Check out their campaigns / endorsements from Petco, Walmart, Best Buy, etc. They’ve most recently produced the web video series for Intel’s new Pocket Avatars app. See the videos here. Here’s a series they created for Kingston Technologies to promote their new wireless data drive, averaging 200,000 views per episode. Before that they created a video for eVite to promote their new Paper eVites; it appeared on their Facebook page with 100,00+ Likes. FLM also produced Radio Shack's commercials for the Christmas 2012 release of their over-the-top TV box. In fact FLM's Roku channel review was “The shorts are eclectic and ironic. It’s as though Vine and Netflix merged into one service.”
The un-branded series FLM wrote and/or produced include the winner of Mobile Content World’s Grand Prize, where they were awarded a Chevrolet by Kevin Spacey for Turbo Dates, (starring NBC’s Whitney Cummings,) or the multi-award-winning series Mr. Wrong. And they have the most-watched series on the YouTube-funded, family-friendly channel AlrightTV. Here’s a 1-minute promo. Chindamo produced the video for Titanic and Avatar producer Jon Landau’s TED talk.
Finally, Chindamo’s students have included Primetime Emmy Winner Bernie Su, billion-hitter Freddie Wong, and 5SecondFilms. He co-wrote the book on Internet Stardom and serve on the Board of Directors of the International Academy of Web Television. MFA: Columbia University, NY. BFA: NYU.

Chindamo brings this expertise to the classroom, telling his students that “The internet is the fastest path to success in this industry—but it won’t wait around for you… Start now. Start writing. Start networking. Start shooting, posting, socializing, and learning how your content does in the real-world marketplace.”
${_EscapeTool.xml($preheader)}