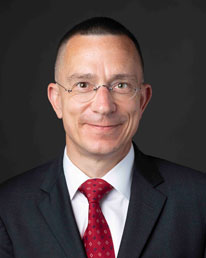 Professor Kochan’s scholarship focuses on areas of property law, constitutional law, administrative law, natural resources and environmental law, law & economics, and jurisprudence, among others. His forthcoming book, Framing the Constitution: The Impact of Labels on Constitutional Interpretation, is slated for publication by Cambridge University Press in 2020. His scholarship has been cited in dozens of books (including many leading law textbooks) and more than 400 published law review articles, and his articles have been downloaded more than 15,000 times from SSRN and BePress.  He has published more than 40 scholarly articles and essays in well-respected law journals, including in the Cardozo Law Review, BYU Law Review, Florida State University Law Review, University of Richmond Law Review, Georgetown Journal of Legal Ethics, Michigan Journal of Environmental & Administrative Law, Berkeley Journal of International Law, and Virginia Journal of Social Policy & Law, to name a few.  Professor Kochan is also the co-author (with the late Calvin Massey) of Eighth and Ninth Editions of Emanuel Law Outlines: Property – Keyed To Dukeminier, Krier, Alexander, Schill & Strahilevitz.

Professor Kochan is an elected member of the American Law Institute (ALI); and, he was appointed by ALI in July 2016 to serve as an Adviser to the Restatement of the Law Fourth, Property project.  Professor Kochan is a Nonresident Scholar at the Center for the Constitution at Georgetown University Law Center, where he was a Visiting Scholar in residence during Fall 2018.  He is a member of the Editorial Board of the Journal of Legal Education.  He has also been a Life Fellow of the American Bar Foundation (ABF) since his election to ABF in 2014.  Professor Kochan received the 2014 Valerie Scudder Award from Chapman University, a merit-based award selected by peers in recognition of outstanding achievement in scholarship, teaching, and service, and one of the highest honors given to a faculty member at the University.

Among his other numerous activities, Professor Kochan serves as the Vice-Chair of the Committee on Environment & Natural Resources Regulation for the ABA Section on Administrative Law & Regulatory Practice; serves as a member of the ABA Advisory Commission to the Standing Committee on the Law Library of Congress; serves as a member of the ABA’s Real Property, Trust & Estate Law (“RPTE”) Section’s Diversity & Inclusion Committee, and serves as an inaugural co-editor and founder of the Property Section of JOTWELL.  Other recent activities have included serving as the Chair of the Real Property Legal Education Committee and Co-Chair of Trusts & Estates Legal Education Committee for the ABA RPTE Section; serving from 2015-2018 as a Contributing Editor of the “Keeping Current-Property” section in Probate & Property, the bi-monthly magazine of the ABA’s RPTE Section; serving as the 2019 Chair of the Association of American Law Schools (AALS) Section on Real Estate Transactions; serving as the 2017 Chair for the Section on Property Law for the AALS; serving as the 2016-2017 Chair of the Planning and Nominations Committee for the AALS Section on Associate Deans for Academic Affairs & Research; and serving in 2017-2018 as an ABA Section Advisor to the Uniform Law Commission (ULC) Study Committee on Adverse Possession.

Professor Kochan has testified before the U.S. Senate Committee on Agriculture, Nutrition and Forestry and before a special federal lands committee of the State of Idaho Legislature.  He has presented his work at national legal conferences and at law schools domestic and foreign, including to speak at the ABA’s Real Property, Trust & Estates Section 2017 and 2018 Spring Symposiums on the “Professors Panel” and to speak at the ABA’s Section of Environment, Energy, and Resources (SEER) 2017 Fall Conference.  He has appeared on national and local radio and cable news broadcasts.  Further, in addition to his scholarly publications, Professor Kochan has published opinion editorials in leading newspapers across the country, including in the Wall Street Journal, the L.A. Times, the Boston Globe, the Detroit News, The Hill, and the Legal Times, among others.

Beyond mentions in articles and books, Professor Kochan’s scholarship has received other notable attention, including being cited in multiple state and federal court opinions; cited and quoted at length in dozens of amicus briefs submitted to the U.S. Supreme Court and other federal and state courts; cited in testimony at the confirmation hearings of now-Justice Elena Kagan in 2010; and the direct subject of a question posed to Secretary of State Hillary Clinton at the 2011 State Department budget hearings; to name a few.  One of his articles was selected as the June 2011 Article of the Month by the Institute for Law Teaching and Learning (ILTL).

Stories in various news outlets have featured quotations to his research or expertise, including in the Washington Post, Wall Street Journal, National Public Radio, Bloomberg Environment, E&E News, Forbes, Science, the Investors Business Daily, the Associated Press ”Big Story” (a wire story later appearing in scores of outlets including the Washington Post, Fortune, CBS News, ABC News, and regional and local newspapers and other sources across the country), the Orange County Register, the Colorado Springs Gazette, High Country News, and the Idaho Statesman, among others.

Immediately before coming to Chapman in 2004, Professor Kochan was an Olin Fellow at the University of Virginia School of Law for the 2003-2004 academic year. During 2002-2003, he was a Visiting Assistant Professor of Law at George Mason University School of Law where he taught courses in Property and Environmental Law.

Professor Kochan received his Juris Doctor from Cornell Law School, where he was a John M. Olin Scholar in Law and Economics and managing editor of the Cornell International Law Journal. During law school, he also served as editor and executive editor of the Harvard Journal of Law & Public Policy symposium issues in 1997 and 1998. He received his B.A. from Western Michigan University, magna cum laude, with majors in both political science and philosophy and where he studied as the John W. Gill Medallion Scholar (full scholarship plus) and was honored as the Presidential Scholar (awarded to the top graduate in the political science department).

After graduating from law school, Professor Kochan was a law clerk to The Honorable Richard F. Suhrheinrich of the United States Court of Appeals for the Sixth Circuit. Following his clerkship, Professor Kochan was an associate with the firm of Crowell & Moring LLP in Washington, D.C., where he specialized in natural resources & environmental law.