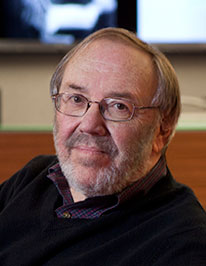 Chuck Workman’s theatrical short, Precious Images, won an Academy Award for Best Live Action Short and was selected by the Library of Congress for the National Film Registry. It has become one of the most widely shown shorts in film history, still in circulation all over the world, and is one of five of Workman’s films circulating in the collection of The Museum of Modern Art in New York.

Workman’s most recent documentary, Magician, about Orson Welles, premiered at the Telluride Film Festival and has appeared in several festivals and media arts centers.   He wrote, directed and produced the documentary Superstar, on artist Andy Warhol, which appeared at several festivals, is in current video release, and is also often shown in museums and media arts venues.  He produced and directed The Source, a documentary film on the Beat Generation, with performance sequences starring John Turturro, Dennis Hopper, and Johnny Depp.  This film premiered in competition at the Sundance Film Festival, had a broad theatrical release, and is now in digital release. His history of the motion picture, The First 100 Years, appeared on HBO, and was released by Warner Video.  It received a Cable ACE Award. The Making Of A Dream, on Martin Luther King, was televised on Dr. King’s 75th Birthday in 2004.  His film history of the American Presidency and popular culture, The People’s President, was shown on PBS and was invited to screen internationally as part of a U.S. State Department series called The American Documentary Showcase.  He wrote and directed the documentary In Search Of Kennedy, a modern look at JFK’s life and legacy, and a documentary on Jonas Mekas and avant-garde cinema, Visionaries, which was invited to the Tribeca Film Festival, Michael Moore’s Traverse City Film Festival, and several other festivals. His recent documentary on the artistic side of film, What Is Cinema?, premiered at the Toronto Film Festival.

Workman created several well-known sequences for 20 Academy Awards presentations, for which he has been nominated ten times for Emmy Awards. Workman’s film, Words, produced for the Writers Guild, was at several festivals, including New York and Denver, where it was awarded Best Short. He has made shorts for three Michael Jackson concerts, created the film shown at Michael Jackson’s memorial, and created the compilation short The Spirit Of America in response to the events of September 11, 2001, which was distributed in 10,000 theaters by the National Association of Theater Owners.

Workman is the writer and director of the independent dramatic film, A House On A Hill, starring Phillip Baker Hall, Laura San Giacomo, and Shirley Knight, which appeared at several festivals, and was released in 2004. He has directed and written several dramatic shorts. The Money, his first dramatic feature, has been recently re-released with a new title, Atlantic City Jackpot.

Workman directed and produced a compilation episode of Mad About You, created special sequences for theatrical and television films including Stalin and The Band Played On for HBO, and Protocol for director Herbert Ross. His video installations have been featured in London’s Museum of the Moving Image, San Francisco’s Exploratorium, the Nexus Institute of Amsterdam, Barnsdall Park Museum, and the Oakland Museum.

Earlier in his career, Workman was a leading creator of film trailers. He made trailers for Star Wars, Close Encounters Of The Third Kind, American Graffiti, Paris, Texas and other major films. Workman also created main titles for movies and TV series, and directed numerous television commercials.  Workman has also directed theater and opera in Los Angeles and New York, and was Artistic Director of the Chaplin Theatre Company in Hollywood and a member of the Actors Studio Playwrights and Directors group. He has written four stage plays which have been produced in the Los Angeles area: The Man Who Wore White Shoes, Diplomacy, Bruno’s Ghost, and Bloomers.

He is a former President of the International Documentary Association and received its Distinguished Achievement Award. He was a Commissioner of the Santa Monica Arts Commission and former Board Member of the Directors Guild of America, where he directs its documentary screening series.  He was on the Motion Picture Academy Documentary Executive Committee and is on the Academy Grants Committee. He has lectured in filmmaking at many media arts centers and colleges, and contributed articles on filmmaking to several magazines. Workman graduated Rutgers University, and studied theater and drama with Francis Fergusson, Harold Clurman, and Stella Adler. He was recently Distinguished Artist and Visiting Associate Professor at SUNY Purchase College in Purchase, NY, and has been appointed Professor and Director of the Documentary Program for Dodge College at Chapman University.

Workman has been given career tributes for his work at festivals including the Mill Valley Festival, the St. Louis Film Festival, the Big Sky Festival, the Ft. Lauderdale Festival, and others. Matt Zoller Seitz, former critic for The New York Times, called him one of the three most influential editors of the past 50 years.