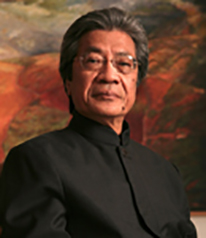 He was the first American to win the highly coveted international Grawemeyer Award for Music Composition (1989), perhaps the most prestigious prize. Ung has received dozens of awards including The Kennedy Center (Friedheim award), two American Academy of Arts and Letters, The Guggenheim Foundation, The National Endowment for the Arts. Most recently, he is being honored by the Asian Cultural Council during its 50th anniversary for The 2013 John D. Rockefeller 3rd Award.

Dr. Ung has received many including those from the Phi la Orchestra, Meet the Composer, three Koussevitsky Music Foundations at the Library of Congress, The Saint Paul Chamber Orchestra, The Los Angeles Master Chorale, The La Jolla Summerfest/Santa Fe Summer Music Festivals, The Fromm Music Foundation at Harvard University. His music is published exclusively by C. F. Peters Corporation and is a member of Broadcast Music Incorporated (BMI).