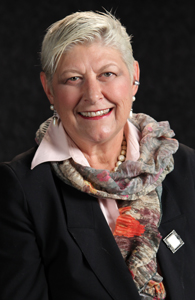 Anne Beatts is a TV writer-producer who won two Emmys as a writer for the original "Saturday Night Live."  At SNL, she and her writing partner Rosie Shuster created many of the most memorable characters, such as Todd and Lisa Lupner, Uncle Roy, Laraine Newman’s Child Psychiatrist, Irwin Mainway, and Fred Garvin, Male Prostitute.

She created and produced the critically-acclaimed CBS sitcom, "Square Pegs," and co-executive-produced the first year of NBC's long-running hit series "A Different World."

She and her producing partner, Eve Brandstein, recently executive-produced and co-directed thirteen episodes of “John Waters Presents:  Movies That Will Corrupt You,” a film series for premium cable.  They are currently working on a documentary about women in comedy, “The Girl in the Room.”

In 1999, she returned to SNL in prime time as a writer and creative consultant on NBC's Emmy-winning 25th anniversary special, for which she won her third WGA Award.  In 1995-96 she was executive producer of "The Stephanie Miller Show," a nationally syndicated late-night comedy talk show from Disney's Buena Vista.

Her directing credits range from prime-time episodic television to numerous Los Angeles theatre productions, both serious and comedic.   She has both written and directed webisodes on the internet.

She was the first woman Contributing Editor of the National Lampoon and both performed and wrote for the "National Lampoon Radio Hour."  She has been published in numerous magazines, including Esquire, Playboy, Los Angeles Magazine, Vogue, Mirabella, Elle and Premiere.  In 1997-98, her humor column "Beatts Me!" appeared weekly in the Sunday Los Angeles Times.  She co-edited the best-selling "Saturday Night Live" (Avon, 1977), "Titters: The First Collection of Humor by Women" (Macmillan, 1976), and "Titters 101" (Putnam's, 1984), and co-authored "The Mom Book" (Dell, 1986).  She contributed a chapter on "Men vs. Women" to "Standup Comedians," (Abrams, 1996). Her work has appeared on Broadway in "Gilda: Live" and the Tony-nominated rock'n'roll musical "Leader of the Pack."

As well as teaching sketch comedy writing and performing privately, she has taught film and television writing at USC’s School of Cinematic Arts, the School of Cinema and Television Arts at California State University at Northridge, and at Dodge College of Film and Media Arts at Chapman University.  She also spent a week at the University of North Carolina, Chapel Hill, as the Evan Frankel Visiting Professor.   She was recently honored by the Museum of Television and Radio as one of the medium’s most influential women in their “She Made It” awards, and her interview has been archived by ATAS.

At present she is co-writing and co-producing, with Judy Belushi and Dan Aykroyd, an hour-long drama series pilot featuring the Blues Brothers.