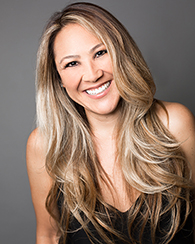 Prior to Chapman, Alicia was the head of dance at the University of Missouri—St. Louis, where she was hired to create a new dance department from the ground up. She was responsible for writing the entire dance curriculum and degree program. During her first year, she was presented with the Achievement in Choreography Award from the John F. Kennedy Center for the Performing Arts for her choreography for Cabaret. She was also the dance director and choreographer for the MISL St. Louis Steamers Professional Dance Team.

Together with her husband, associate professor of Entertainment Technology, Don Guy, they developed a one-of-a-kind dance and technology educational partnership with Cirque du Soleil. At Chapman, she teaches Jazz, Ballet, Dance in Film, Technology for Live Performance that has provided mentorship from Cirque du Soleil and their industry partners, directs the Dance Tour Ensemble, and a summer travel course that tours throughout Europe. She is also the founding faculty advisor for the undefeated Chapman University Dance Team and the hip hop student organization, Team Shaka.