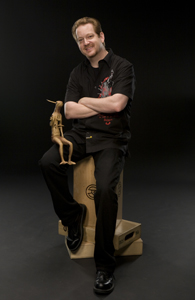 The marriage was inevitable.  Artists in love with science fiction and fantasy fell head over heels for the endless possibilities of computer graphics software.  Gaming, movie special effects, web sites and more offered fertile ground for a never ending galaxy of space ships and aliens, monsters and superheroes.

Adam Rote's evolution was typical.  Fascinated with this world of far-reaching imagination, he quickly jumped into using early graphics software, often as a beta tester.  He moved into video post-production and gaming after earning a degree in computer graphic design.  A lead artist for game giant Interplay Productions, he worked on projects such Star Fleet Academy.  Today, he is creating top-secret games for Microsoft's new Xbox technology.

Rote loves the challenge of creating 3D models, matte backgrounds, textures and lighting.  He also creates titles and special effects for film and video, teaching his students to work together to realize their creative dreams.  "These programs open up another creative outlet for film students," he says.  "It's like food to me," he says of the artistic challenge.  And for his students, it adds "extra spice to their cooking," or perhaps, extraterrestrial spice.