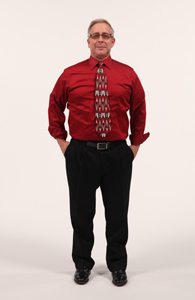 Professor Veston Rowe was raised on the belief that it's important to give back; a belief that extends into his work in public relations. Having graduated with honors from the University of Oklahoma with an MA degree in Journalism, Rowe returned to his undergraduate alma mater, Phillips University, where he was hired as their Assistant Director of Publications and eventually became the Admissions Publications Coordinator. While working at Phillips, he became one of the founding member's for Enid's Habitat for Humanity.

"I remember when we rehabbed our first home and the people moved in," Veston says. "The ceremony was pretty joyful, because we had all worked together to make something spectacular happen."

Six years after starting at Phillips, Rowe was hired at Chapman as the Admissions Publications Coordinator. In addition to receiving numerous awards for his publications work and juggling a full time, college teaching schedule, Rowe found time to teach a class on journalism to at-risk, high school students and worked on several public relations campaigns for non-profit organizations such as Stop AIDS Orange County, Lifeguard Orange County, and Being Alive.

"Most non-profits don't have big, flashy public relations budgets," Rowe says, "so they have to rely on the goodness of volunteers to implement their public relations plans. I've always been happy to pitch in, because they're so grateful for your efforts and it makes working with them so worthwhile."

Rowe was featured in a November 2008 article for People Magazine, entitled Heroes of Hard Times. The article describes how he took in his friend Sparker's family after a shelf full of filing boxes collapsed on him. Unable to work for two months, Sparker and his family could no longer afford their mortgage payment and lost their home.

"Sparker's wife, Rosie, is a really strong person, and she was standing in the yard with the kids, a U-Haul in the street packed with all their things, and because they didn't have any place to go, she just started crying. I told her, 'Okay, unpack your stuff. You can all come stay with me.'"

As for Rowe, he couldn't be happier. "Sparker and his family get upset sometimes because they think they'll be seen as the people who Veston is taking care of. However, I've gotten way more out of it. For starters, I didn't have kids and I got to watch Sparker's kids grow up. I never thought I'd have pets, and now we have three dogs and two guinea pigs. So for me, it's been the best thing in the world."