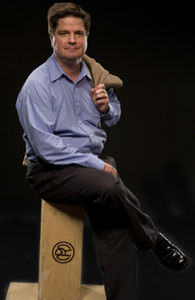 As a teenager growing up in England, Arundale spent an inordinate amount of time in art houses watching classic European films. Fellini, Antonioni and Fritz Lang were among his favorites but it was after watching Jean-Luc Godard's Alphaville, that Arundale knew that he wanted to become a filmmaker.

He is a product of NYU where he studied film production as well as USC where he earned an M.F.A. in Producing in the Peter Stark Program. The first short film he produced there was a finalist in the Student Academy Awards. The following year, he produced a feature film that won an award at the Sundance Film Festival.

But it is editing that has always been his passion and when things went digital, Arundale jumped back into the fray. "The technology of film had not really changed much over the years, but when non-linear editing arrived, I was hooked." Since then he's edited TV shows and feature films, documentaries and music videos. "It's a very exciting time to be working in the industry right now because things are moving so quickly and we have to adapt to the ever-changing landscape," he says.

Arundale has written a book on film editing with co-author and alum, Tashi Trieu:  Modern Post – Workflows and Techniques for Digital Filmmakers which has been adopted at numerous film schools. He is writing a new book on the digital post paradigm to be completed in early 2019.

SURVIVORS - Editor of feature length documentary about the opioid epidemic in Dayton, Ohio. This mid-sized midwestern town finds itself as ground zero for heroin and opioid abuse with residents dying in startling numbers. Directed by Kay Sumner, Emmy nominee and creator of the hit reality TV series THE DOG WHISPERER. Currently out to distributors.
Pendleton at 75 - In recognition of the 75th anniversary of the commission of Camp Pendleton, I edited and produced a documentary outlining the contributions made by this marine base and its inhabitants to the fighting in major conflicts including the war in the Pacific, Korea, Vietnam, Desert Storm in Kuwait, Afghanistan and Iraq. Scheduled to air on the History Channel in early 2018.
26 Seconds - a documentary committed to the never-ending struggle against human exploitation and sex slavery. Directed by Prof. Kelly Galindo and edited by Scot Arundale with numerous alums participating including Tony Deng, Nico Aguilar and many many more.
MODERN POST: Workflows and Techniques for Digital Filmmakers - Scott Arundale and Tashi Trieu - Focal Press - London 2014 ISBN: 978-0415747028
Editor - BIOLOGY 101 - dir. Christopher R. Smith - Feature Film
Supervising Editor - HOLLYWOOD FILM DIRECTING - Gil Bettman & Mark Travis DVD Lecture Series
Producer & Post Production Supervisor - LUCKY BASTARD - dir. Everett Lewis - Feature Film