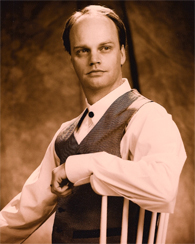 Ron Anderson holds a doctoral degree in Piano Performance, as well as degrees in Opera and Music Composition, and has enjoyed successes in all three endeavors.

During his 10-year singing career, Dr. Anderson performed about two dozen operatic roles, including Escamillo in Bizet’s Carmen and the title roles in Puccini’s Gianni Schicchi and Britten’s Noye’s Fludde. His oratorio credits include numerous performances of the bass solos in Handel’s Messiah, requiems of Mozart, Fauré, and Duruflé, baritone soloist in Orff’s Carmina Burana, and multiple performances of Beethoven’s Ninth Symphony, as well as other choral masterpieces.

In addition to his long list of operatic roles, he has been regularly featured as soloist (both as a pianist and a vocalist) in televised concerts with several orchestras throughout Southern California, including Torrance Symphony, the Marina Symphony, the Cypress Pops Orchestra, and the Redlands Bowl.

His compositions for orchestra, choir, chamber ensembles, piano solo, and voice have been received enthusiastically, having won competitions and critical acclaim. Recently, his choral anthem Wilt Thou Forgive? was awarded First Prize in the Cerddorion Composers Competition, tied with Bernardino Zanetti of Italy. He is a current winner of the SMP Press composition contest in three categories (Choral, Chamber, and Solo). His compositions and arrangements are published on SMP Press (Sheet Music Plus). Dr. Anderson was recently selected as the 2022 Commissioned Composer for CAPMT, the California affiliate of the Music Teachers’ National Association.

Aside from teaching at Chapman, Dr. Anderson is presently on the music faculty at Los Angeles City College, where he teaches Piano and Theory, and composes arrangements for choral ensembles. His private studio has produced several winners in the National Chopin Foundation, MTNA, Composers Today, Robert Avalon International Competition for Composers, and others. He is in demand as a lecturer, and often adjudicates for competitions and events, such as the Steinway & Sons Junior Piano Competition, MTNA Composition Competition, MTNA State and Division Piano Competitions, the Reno Youth Music Festival, the Yamaha National Junior Original Concert, MTAC Young Composers Guild, and the Composers Today State Contest and Evaluations. Dr. Anderson is the former State Chair for the Composers Today Young Composers Guild, and continues to serve in an advisory capacity.