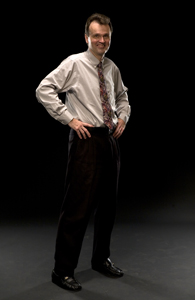 Seeing Akira Kurosawa's The Seven Samurai marked a turning point in Paul Wolansky's life.  He was fascinated by an experience he found "as vivid as my dreams," captivated by the power of film to express universal truths.

The son of Ukrainian immigrants, Wolansky's family spoke Ukrainian at home and lived on the grounds of a mental hospital, where his father was the administrator.

Separated from the life his American friends lived, Wolansky became an observer.

He studied directing and screenwriting at Columbia University under Milos Forman and Frank Daniel, who later offered him a job teaching at USC.  It was as a teacher that Wolansky found a career he loved.

"In the business, another thousand people are trying to come up with the latest cool idea, but in film school you have the chance to convey your deep emotional beliefs about life."

"I push my students to dig deep," he says, "to really put out their vision of the truth."  If they do it well, Wolansky maintains, they too will see people be moved by what they have to say, just as he was first moved by Kurosawa, in a way that changed his life.