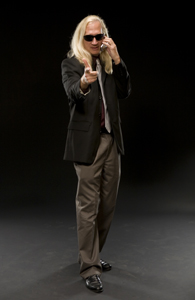 Paul Gulino believes in Hitchcock's adage that "films are made on paper." Although students may obsess about a film's look, all of the visual elements, he says, function to enhance the story. And that, ultimately, comes from the mind of the screenwriter.

In spite of the fact that there seems to be a screenwriter behind every corner (in California, at least), screenwriting is something of a lost art, Gulino maintains, having seen hundreds of flat screenplays as a story analyst for Showtime Entertainment.

Honing his own skills through writing for the theater and practicing the craft as taught by Frank Daniel and Milos Forman, Gulino secured an agent with William Morris on the basis of his thesis script. With that "real world" confirmation in hand, Gulino went on to write and see produced features, plays and comedy sketches.

Screenwriting, he says, isn't a craft you can learn from a book. "The best way is to learn from someone who knows the craft, so you can see how theories can be applied to your own work." There must be something to that. Or at least it's worked for screenwriter Paul Gulino.