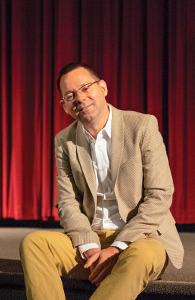 Professor Kowalski has taught at Chapman University since 2000 and has been an Associate Dean at the Dodge College of Film and Media Arts since 2011. He is the Chair of CILECT North America (CNA), the association of CILECT schools in the North American Region. He has a B.A. in Semiotics from the University of Pennsylvania and a M.A. in Visual Anthropology from the University of Southern California. His areas of specialization are sound design and documentary filmmaking. He continues to occasionally work as a freelance sound designer on documentary films. He enjoys hanging out with cats and bicycling around Los Angeles.

Post-sound supervisor on HE DREAMS OF GIANTS, a feature documentary about Terry Gilliam's 30-year quest to bring The Man Who Killed Don Quixote to the screen. The film is a revealing portrait of a late-career artist and a meditation on the value of creativity in the face of mortality.
I was responsible for the complete sound design work on the feature length documentary The Bad Kids. The Bad Kids is an observational documentary that chronicles a extraordinary principal’s mission to realize the potential of these students whom the system has deemed lost causes. The movie premiered and won a special award at at the 2016 Sundance Film Festival.
Performed the complete sound design on "Rockaway After the Storm," Directed & Produced by Jennifer Callahan "Rockaway After the Storm" is a 50 minute documentary that explores the social and environmental impact that Hurricane Sandy had on the Rockaway Peninsula in NY. The documentary has been broadcast on New York Public Television.
Performed the complete sound design on "The Double Life of Li Xianglan'" Produced & Directed by Mei-Juin Chen Funded by the Rockefeller Foundation's Asian Cultural Council and Taiwan's Culture and Arts Foundation. "The Double Life of Li Xianglan'" is a documentary biography that explores the early life and multiple personalities of Li Xianglan (a.k.a.: Yoshiko Otaka and Shirley Yamguchi) a Chinese-born Japanese actress and singer who made a career in China, Japan, Hong Kong, and the United States.
Designed the complete sound track for "La Piedra Ausente" co-directed by Jesse Lerner and Sandra Rozental about the removal of a pre-Colombian monolith from a small town in Mexico and the subsequent identity crisis the removal caused.
Designed a 18 channel sound track for "Out In Public", a multi channel video installation designed by video artist Natalie Bookchin that explores the notion of race through a montage of Youtube video blogs. The piece exhibited at the LACE gallery in Los Angeles in April, 2012.
I did the complete sound design on "The Black Kung Fu Experience" Produced and directed by Mei-Juin Chen & Martha Burr for PBS The film is a 52 minute documentary about the history and experience of African-American martial arts fighters.
I did the complete sound design on "Scene of a Crime" Produced and directed by Grover Babcock and Blue Hadaegh • A feature length documentary that explores a 10-hour interrogation that culminates in a disputed confession, and an intense, high-profile child murder trial in New York state. - Grand Jury Award at the Full Frame Documentary Film Festival 2011 - Grand Jury Prize Winner at the DOC NYC Festival 2011
I did the complete sound design on "Super Solar Yacht," a 45 minute documentary Produced by Mei-Juin Chen & Martha Burr for National Geographic The documentary is about the design and construction of the world’s largest solar yacht. It will screen on the National Geographic Asia cable channel.
I did the complete sound design on "Ray Charles’ America" a 90 minute documentary produced by Tremolo Productions for The Bio Channel. The documentary is about the singer Ray Charles’ and his music. It screened at the 2010 Amsterdam International Documentary Festival and will air on the Bio Channel in November 2010.