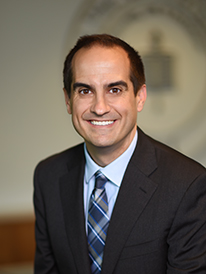 Matt Parlow is in his fifth year as the Dean of the Chapman University Dale E. Fowler School of Law. He also holds the Donald P. Kennedy Chair in Law. Previously, Dean Parlow was the Associate Dean for Academic Affairs and a Professor of Law at Marquette University Law School, where he taught Property, Land Use, Legislation, Urban Redevelopment, and Professional Sports Law (with Major League Baseball Commissioner Emeritus Bud Selig). Prior to that, he served on the faculty at the Fowler School of Law from 2005 to 2008. Dean Parlow was voted the Professor of the Year during his time at both Marquette Law School and the Fowler School of Law.

Dean Parlow has also served on the board of directors of several non-profit organizations and has been appointed to a number of local and state government task forces. Currently, he is a trustee of The Pegasus School and serves on the City of Costa Mesa’s Finance and Pension Advisory Committee. Dean Parlow also serves as a consultant to professional sports leagues and teams, and advises local, state, and national officials on a variety of political, legal, and policy matters.