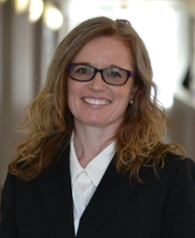 Kyndra Rotunda is a Professor of Military & International Law and Executive Director of the Military and Veterans Law Institute at Chapman University.

Rotunda was born and raised in Wyoming and attended the University of Wyoming, where she earned a BA in Political Science and, later earned her law degree. Rotunda was the Honor Graduate of her law school graduating class.

After law school, she began her legal career in the US Army JAG Corps, where she held the rank of Major. Rotunda was serving at Walter Reed Army Medical Center, in Washington, DC on 9-11, and was the JAG Officer on-call to provide legal support to Pentagon victims and their families.

She went on to serve in several missions related to the Global War on Terror. She completed a tour at the detention camp in Guantanamo Bay, Cuba; was the legal advisor to a team of investigators pursuing leads in the war on terror; served as a prosecutor at the Office of Military Commissions, prosecuting detainees in Guantanamo Bay; and represented wounded troops at Walter Reed Army Medical Center.

After the ground war in Iraq began, Rotunda was appointed by Lieutenant General Kevin C. Kiley (former Surgeon General of the Army) as the Deputy of Walter Reed’s Family Assistance Center, where she provided provide legal advice to wounded troops returning from the battlefield, and their families. She was the lawyer assigned to Jessica Lynch after Lynch’s historic rescue.

After leaving the JAG Corps, Professor Rotunda was appointed by the Governor of Wyoming, Dave Freudenthal, and confirmed by the Senate, as the Wyoming State Planning Coordinator. She led the Governor’s policy team; advised the Governor on Military related matters; and served as the Governor’s Legislative Liaison during the 2004 Legislative session. Rotunda also testified before State and Federal Legislative committees on behalf of Governor Freudenthal, including testimony opposing VA hospital closings in Wyoming. She also assisted in drafting Wyoming’s Military Family Fund, to provide financial relief for families facing deployment, which became a model that other states followed.

While working for Governor Freudenthal, Rotunda also partnered with Wider Opportunities for Women, a national organization, to initiate Wyoming’s first state-wide self-sufficiency study, which explored the demographics of people living below the poverty-line, and which provided valuable information to legislators and aid organizations in helping Wyoming citizens who need it the most. The Self Sufficiency Study remains an important part of services provided to Wyoming Citizens who struggle to make ends meet.

In 2010, due to generous funding, Rotunda’s program became a standalone Institute at Chapman University, The Military and Veterans Institute. Rotunda was inducted into Chapman’s Million Dollar Club, for securing several million dollars in outside funding to launch and support the Institute.

The Military & Veterans’ Law Institute represents military families, and veterans, in all types of legal disputes and engages in scholarly and policy work related to military/veterans law. Her Law Fellowship program, provides training opportunities for law students and beginning lawyers. Rotunda modeled her program on residency programs that are ordinarily a feature of medical school training. Professor Rotunda’s innovative teaching model, was featured in the ABA Magazine.

Rotunda also previously held a Lecturer appointment at Berkeley School of Law, where she co-founded the Veterans Legal Practicum.

Professor Rotunda is regarded as a leading expert in military/veterans’ law. Her work appears in both scholarly and popular journals; her publications are used to train lawyers around the country; and she has testified before the U.S. Congress on matters related to Guantanamo Bay and issue impacting service members.

Professor Rotunda’s law review publications have appeared in journals throughout the U.S., including The Land & Water Law Review, The Richmond University Law Review, The Michigan State Journal of International Law, Chapman Law Review, UMass Law Review, The Akron Constitutional Law Journal, The Encyclopedia of the Supreme Court and others.

Rotunda is an avid writer and advocate. Her op-eds have appeared in newspapers such as The Wall Street Journal, The Christian Science Monitor, The Chicago Tribune, The Washington Times, The New York Sun, and The Orange County Register. Her work has also been featured in Time Magazine, the American Bar Association Magazine, The Orange County Lawyer, The LA Daily Journal and others.

Professor Rotunda is also an elected member of the American Law Institute; a member of Phi Beta Kappa, and recipient of the Woman Making a Difference Award from the California State Senate.

Kyndra Rotunda Publication's You Can Find on Amazon: