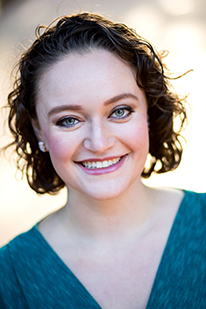 While at ASU Kyla studied with Carole FitzPatrick and performed a variety of operatic roles including Adina (L’Elisir d’Amore), Josephine (H.M.S. Pinafore), and Erste Dame (Die Zauberflöte) through Arizona State’s Music Theatre and Opera. Their production of H.M.S. Pinafore placed second for the 2017 American Prize in Opera - College/University division.

During her studies at Chapman, Kyla studied with Dr. Rebecca Sherburn, Dr. David Alt, and Margaret Dehning. As an undergraduate, Kyla performed a number of roles with Opera Chapman and sang with the University Singers. Kyla has also worked as a conductor and instructor with the Chapman Choral Music Camp each summer from 2013-2017 and 2019.

Recent operatic performance credits include Fiordiligi in Così fan tutte as a Guest Artist with Opera Chapman, Baby Doe in the Ballad of Baby Doe with Opera in the Ozarks, and Adriana in the ASU English Workshop Premiere of Fowler and Flack’s Behold the Man: L’Opera del Ecce Homo. Kyla has also performed in the Los Angeles and New York areas, most notably with the Metropolis Opera Project (NY) in the chorus of their production of Tosca.

In addition to her performing, Kyla is a passionate music educator. While working in Phoenix, she maintained a thriving piano and voice studio, with about thirty private students of all ages and skill levels, and she is excited to share her passion for music here at Chapman.