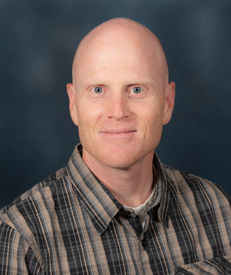 Kent Lehnhof earned a BA from Brigham Young University and a PhD from Duke University. He has been teaching at Chapman since 2004, where he specializes in early modern literature, with a particular emphasis on Renaissance drama and questions of gender. His essays on Sidney, Spenser, Shakespeare, and Milton have appeared in several edited collections as well as in such journals as ELR, ELH, SEL, Modern Philology, Renaissance Drama, Shakespeare Bulletin, Milton Quarterly, Milton Studies, and Criticism. His most recent article--on twinship and marriage in The Comedy of Errors--will soon appear in SEL.

Dr. Lehnhof's past research projects have focused on (1) somatic experience in Paradise Lost; (2) intersections of antitheatricalism and antifeminism in early modern England; and (3) connections between Levinas and Shakespeare. At present, he is researching twinship in the Renaissance.

In alternating years, Dr. Lehnhof leads a summer travel course to London. The next iteration of ENG 355 (Theater in England) is slated for summer 2021.