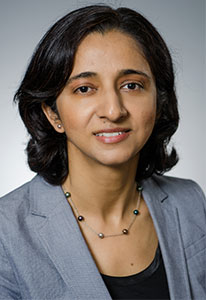 Dr. Kamaljit Kaur is an Associate Professor of Targeted Drug Delivery and Biomedical Diagnostics at the Chapman University School of Pharmacy (CUSP).

Dr. Kaur received her Ph.D. (1999) in Bioorganic Chemistry from Case Western Reserve University (Cleveland, Ohio). She was a postdoctoral fellow at Wesleyan University (Connecticut) before moving to the University of Alberta (Canada), where she joined the Faculty of Pharmacy and Pharmaceutical Sciences as an Assistant Professor of Medicinal Chemistry in 2004.  She moved to Chapman University (Irvine, California) in 2014 to accept a part-time position as a Distinguished Chancellor Fellow and in 2015 as a full-time founding member of the CUSP faculty.  Her research interests focus on engineering peptides and peptide-mimetics for biomedical and nanotechnology applications.  These applications include (i) targeted drug delivery to breast cancer and melanoma, (ii) targeted drug delivery to the brain for Alzheimer’s Disease treatment, and (iii) peptide-based platforms as diagnostics for cancer using blood samples (liquid biopsy).

Over the past decade, the Kaur group has contributed to the development of cancer cell-specific peptides and peptide-drug conjugates (PDCs) as a new modality for breast cancer treatment.  Her group has also developed multiple peptide-based platforms with different transduction methods for detecting cancer cells and bacteria from liquid samples.  Kaur has published 69 peer-reviewed articles (h-index = 31), 4 book chapters, been listed as an inventor in 3 approved patents, and has presented 27 invited talks.  She serves on the review panel of several granting agencies, including the National Institutes of Health (NIH) and Canadian Institutes of Health Research (CIHR).  She is currently an editorial board member for Scientific Reports and Pharmaceutics.