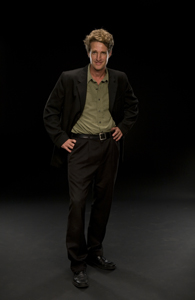 Jeff Swimmer is Associate Professor at Chapman University’s Dodge College of Film and Media Arts, where he teaches Documentary Production and oversees several of Dodge’s renowned International Documentary programs. He has taught at Dodge since 2008.

He is an award-winning Director, Producer and Writer of documentary films on both sides of the Atlantic. His programs have aired on BBC, PBS, NBC NEWS, HBO, A&E, CNN, DISCOVERY, THE HISTORY CHANNEL, TRAVEL CHANNEL, ARTE and many others. His films have examined a wide range of topics, including historical films, political documentaries, and documentaries about wildlife, natural history and adventure.

He has also taught documentary filmmaking at numerous programs in the United States and Europe. His 2001 “Northern Ireland: Dying For Peace” (Supervising Producer, CNN) won a DuPont Award.

He is a 2018 Fulbright Scholar, having just completed a 2-week assignment conducting multi-day documentary workshops at film schools in South Africa. He is also the author of the popular 2015 textbook, “Documentary Case Studies: Behind The Scenes Of The Greatest (True) Stories Ever Told.” (Bloomsbury, New York and London).

Finished directing indepedendent doc "Unraveling" in Spring 2021, and launched festival, distribution deals for film.
HBO agreed to fund the feature documentary I am producing about the Synanon cult.
Produced and directed a documentary about Mexican revolutionary Pancho Villa's cross-border raids into New Mexican border towns at the turn of the 19th century, and their impact on these areas today.
For the 3rd year in a row, I oversaw the production of 6 short documentaries about the Sikh diaspora, involving 3 Faculty and 14 students. I led the group on a filmmaking trip to the U.K., overseeing the students at all levels of Pre-Production, Production and Post-Production. The films will be shown at the Sikhlens Festival in November 2017.
For the 2nd year in a row, I oversaw the production of 4 short documentary films around the world exploring the Sikh diaspora, for the Sikhlens film festival in November 2016.
Produced, Directed and Wrote "Doctor Ji," a 30-minute documentary aimed at public television distribution, about a well-known Sikh-American guru and philosopher.
Supervised production of documentary with 6 Chapman students, from across multiple departments, of a short film about the work of the Orange Country District Attorney's anti-trafficking unit. Film is now widely used in the DA's office's public outreach campaign.
Supervised production of 4 short documentary films, working with 10 current Dodge College students and several alums, about the accomplishments of the Sikh Indian Diaspora. FIlms will screen at the Sikhlens Arts and Film Festival in November, 2015.
"Documentary Case Studies: Behind The Scenes of the Greatest (True) Stories Ever Told." It will be published by Bloomsbury Publishing in December, 2014.
"A Golden State of Mind: The Storytelling Genius of Huell Howser" - Jeff Swimmer was Director, Producer and Writer. 1-Hour. Aired on PBS in California and nationally, and won numerous festival awards, including Best Documentary at Sacramento Film Festival.
**Developed and began writing book for publication: "Documentary Case Studies." Book closely examines the most successful and challenging films made by the world's leading documentary filmmakers, exploring how they were conceived, produced and how challenges were overcome during the entire process. Expect publication in Summer 2012.
**Organized filming and creation of short documentary about the Heritage Museum of Orange County, for Judge Jim Gray. May 2010. Oversaw student filmmakers creating the short film.