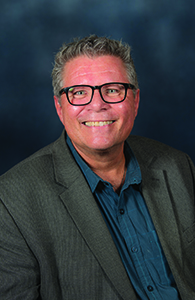 "Everything goes back to baseball," says James Gardner, Associate Professor, and Director of Television Studies. "If you're the manager of a baseball team, you have to create a team of divergent individuals, with different skills, who play together as a unit. The same is true of theatre, it's true of film, and it's true of television."

Gardner graduated with an MFA in Directing from the Yale School of Drama. He later went on to become a Directing Fellow at the American Film Institute. He has directed several sitcoms, including the Prime Time Emmy Award- nominated series My Sister Sam, and the longtime running series Coach.

"The people who make television work," Gardner says, "are the people who recognize and accept the television show for what it is. People often assume that television's purpose is to create art, but that's a mistake. Art happens by mistake. The real purpose of television is commerce. Art sometimes happens, despite commerce, but the show exists, first and foremost, to draw viewers to commercials for products. As the director, it's my job to attract those viewers, by creating a great show. One way to do that is to create a space where the crew and the actors feel safe to contribute ideas. After all, everyone on the set wants the show to be great, and if everyone is working together towards that goal, then hopefully the audience will notice and keep watching."

In 2002, New York University hired Gardner to design an integrated curriculum for their new television program that would pull on the resources of the 11 existing programs listed under the TISCH School of the Arts. The program attracted the attention of Dodge College Dean Bob Bassett, who asked Gardner to develop the TV program at Chapman University.

"Bob's really smart," Gardner says. "He wanted to create a unique program, called narrative television, which would produce the best trained students to enter the profession."

As for the future, "We're all crossing our fingers to see what happens next. This whole curve ball of 3D, and the internet, nobody knows where it's going. About the only thing I can say is that it won't involve a television set, unless that television is hooked to the computer. As our program evolves, you're going to see television, the internet, and 3D merging together, giving our students a chance to live television history."