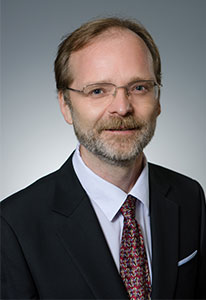 Dr. Innokentiy Maslennikov joined the Chapman University School of Pharmacy on September 1st, 2015 as a research assistant professor of Biomedical and Pharmaceutical Sciences. Dr. Maslennikov graduated from Moscow State University in 1986 with a M.S. in Mathematics and Physics and received a Ph.D. in Biophysics at the Moscow Institute of Physics and Technology in 1993. In his Ph.D. thesis “Spatial structure of Bacteriorhodopsin transmembrane segments” Dr. Maslennikov combined experimental NMR technique with theoretical conformational analysis and described the detailed spatial structure of Bacteriorhodopsin transmembrane segments.

Since 1986 Dr. Maslennikov is working on application of biophysical methods to the problems of structural biology. Dr. Maslennikov is using NMR spectroscopy for structural and functional studies of membrane and membrane-associated peptides and proteins. Among the many targets he had studied are channel-forming antibiotic Gramicidin A, bacteriorhodopsin, neuronal and muscular Acetylcholine receptors, human ERG K+-channels, G-protein coupled receptors, transmembrane receptor kinases, snail, snake, and scorpion toxins, human membrane proteins, as well as other membrane proteins and their natural and synthetic ligands.

After obtaining Ph.D. degree Dr. Maslennikov has worked as a Senior Research Scientist in the Structural Biology Laboratory of the Shemyakin-Ovchinnikov Institute of Bioorganic Chemistry, Russian Academy of Sciences. During the years in the Russian Academy of Sciences (1993-2005) he initiated several projects to study structure and function of the membrane and membrane-associated proteins, developed new approaches to the analysis of structural NMR data, and served as scientific advisor for graduate and Ph.D. students.

Since his arrival at The Salk Institute for Biological Studies (La Jolla, CA) in 2006, Dr. Maslennikov has been a key investigator in projects on structural studies of membrane proteins by NMR spectroscopy. Additionally, he studied the physical basis of activation of the ion channels and participated in a large project on structural studies of transmembrane kinase receptors. Dr. Maslennikov developed a strategy for a cost-efficient structure determination of membrane proteins that has allowed him to quickly solve the backbone structures of membrane domains of three histidine kinase receptors and structures of six human membrane proteins by NMR spectroscopy. As a staff scientist and a co-Director of NMR facility, Dr. Maslennikov led an effort within The Salk Institute to facilitate the use of NMR spectroscopy and other biophysical methods by the Institute scientists.

Dr. Maslennikov’s publication record includes over 40 titles, including those appeared in leading journals such as the Proceedings of the National Academy of Sciences USA, Nature Methods, Current Opinion in Structural Biology, PLOS Biology, etc. He had presented his work at more than 20 national and international scientific meetings.

Dr. Maslennikov’s research is focused on application of NMR spectroscopy and other Biophysical methods to the problems of Biochemistry, Chemical Biology, and Structural Biology. Specific areas of interests include: (1) solution NMR spectroscopy for structural and functional studies of proteins and peptides, (2) Structural Biology of membrane proteins, (3) Structure and function of Claudin complexes in tight junctions, (4) Structure, function, and signaling of natural and synthetic TGF-β ligands.