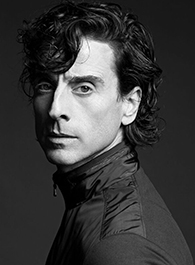 Ido Tadmor is an internationally acclaimed dancer-choreographer who has performed with legendary companies Bat Dor, Bat Sheva, Lar Luvovitch, and Complexions. Ido is the 2011 winner of the highly respected Landau Prize in Israel for life achievement, and has represented the state of Israel around the world as the country’s Ambassador of Dance for more than three decades, touring to Cyprus, Paris, Germany, Croatia, Brazil, California, Hong Kong, Netherlands, Poland, Korea, Angola, Poland, Senegal, and Lithuania. He has been named one of the top ten dancers in modern dance by the Vienna Committee and has worked with the National State Ballet of Turkey, the Bolshoi, the Israeli Ballet, the Polish National Ballet, The Dance Academy in Rome, and Artemis in Amsterdam, among many others.