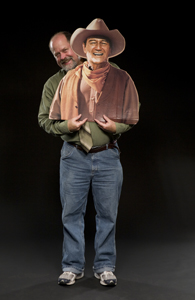 Harry Cheney is as mild-mannered as they come. Any day of the week you can find him sitting contentedly in his campus editing suite, working on Hollywood's latest project, often with a student by his side. Yet somewhere beneath that placid exterior must rage a creative fire, the kind that could fuel the inspired sound editing that Cheney contributed as part of the team that won an Academy Award for  the blood-curdling soundtrack of Bram Stoker's Dracula.

In fact, Cheney's long list of credits, including feature films (Legends of the Fall, Bottle Rocket, Guarding Tess, Poetic Justice, The Mirror Has Two Faces, Atlas Shrugged, CBGB), TV movies (Sworn to Silence, Intruder, I Want to Live, Dead by Sunset), and TV series (from Smallville and Gilmore Girls to Deadwood), have brought him numerous Emmy and Golden Reel nominations. One has to suspect that a hidden dynamo of energy lurks concealed just beneath his professorial-looking surface. Whatever his driving force, students are well aware that editor Cheney is much in demand—in Hollywood, and in the classroom—for his clear, consistent and well-thought out delivery of the goods. A truly sound man, one might say.