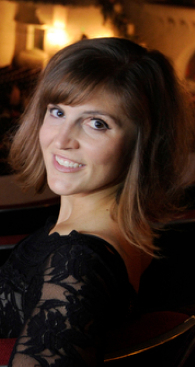 Emily Carman earned her PhD from the Cinema and Media Studies program at UCLA's Department of Film, Television, and Digital Media, where she channeled her passion for film history, especially classic Hollywood cinema in the 1930s, into various scholarly and professional pursuits in film. While her primary research expertise focus on film historiography,  stardom, the Hollywood studio system and media industries, other scholarly interests include postwar European cinemas and moving image archive theory and practice. Carman's most recent book on the University of Texas Press 2016, Independent Stardom: Freelance Women in the Hollywood Studio System, uncovers how  female stars including Constance Bennett, Irene Dunne, Miriam Hopkins, Carole Lombard, and Barbara Stanwyck challenged Hollywood’s patriarchal structure by freelancing and working independently in Hollywood. Through extensive, original archival research, her book  rethinks standard histories of Hollywood to recognize female stars as creative artists, sophisticated businesswomen, and active players in the then (as now) male-dominated film industry. Her second book, the edited anthology Hollywood and the Law on BFI/Palgrave-MacMillan, brings together leading scholars in the film and media as well as legal studies to examine  how legal infrastructures influence and regulate the content, distribution, and consumption of Hollywood film and media. Her chapter in the book, “Doing the Deal: Talent Contracts in Hollywood,” traces the evolution of above-the-line talent contracts and analyzes the “De Havilland Law” verdict delivered by the California Supreme Court in 1944 that legally recognized movie talent’s right to be a free agent, and considers the current application of this legal decision in present day Hollywood. Additionally, she has published articles in Quarterly Review of Film and Video, Celebrity Studies,The Moving Image, and Cinephile.

In addition to her scholarly pursuits, she has worked for various motion picture archives and cultural institutions, including the Warner Bros. Archives of the School of Cinematic Arts at the University of Southern California, where she was the curator responsible for the preservation of the collection and its public access for research, the Academy Film Archive, L'Immagine Ritrovata at the Cineteca di Bologna, and the UCLA Film and Television Archive.

In Spring 2016, she co-curated the film series “Independent Stardom Onscreen: Freelance Women in Hollywood” for the UCLA Film and Television Archive, which showcased various films made by the freelance actresses featured in her book. She appeared as a co-host for Turner Classic Movies' "Trailblazing Women: Actresses who Made a Difference" in Fall 2016, discussing the wartime contributions of Bette Davis, Marlene Dietrich, Hedy Lamarr, and Josephine Baker.