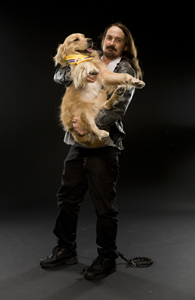 Some people love watching movies.  Some love making them.  Dave Kost loves both.  And he brings a combination of theoretical understanding and practical knowledge to the classroom.  He knows what makes a film work for an audience whether it's a big-budget feature or a student short, and he also knows exactly what it takes to go out and make either.

In the graduate program at New York University, Kost learned the importance of storytelling and creative vision.  He also came to realize that resourcefulness is more important than resources.  Since then he has worked professionally in almost every capacity on film and video productions of all sizes—from camera to lighting, production, sound, editing, and writing.

Kost has proven his understanding of the production/storytelling process over and over again with his award-winning short films which have been screened at festivals and distributed on television all around the world.  If you watch Sundance, Bravo, IFC, Showtime, or the Sci-Fi Channel, you may have already seen some.

Kost loves teaching and mentoring and brings his all-around knowledge to both.  He knows the way for students to make great short films is to look at the big picture.  That means telling involved stories with a unique creative vision and strong technical execution, a winning combination, as David Kost surely knows.