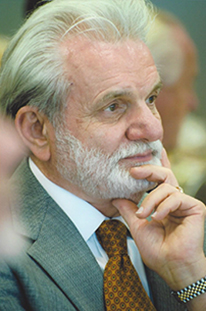 Dr. David M. Crowe is Professor Emeritus of History and Law at Elon University. He is the recipient of the Southern Conference on Slavic Studies’ Richard Stites Senior Scholar Award and the V. Stanley Vardys President’s Prize for Books on Baltic Studies.  Several of his books were adopted as selections of the History Book Club, while Choice named The Holocaust: Roots, History, and Aftermath an Outstanding Academic title for 2008. The New York Times praised his biography on Oskar Schindler, saying that it “made Schindler more human, and also more extraordinary.”

He has been a Visiting Scholar at the Harriman Institute at Columbia University and has taught at Central European University in Budapest, Hungary. He has also been a Fellow at the Center for Slavic, Eurasian, and East European Studies at the University of North Carolina at Chapel Hill. He is President Emeritus of the Association for the Study of Nationalities at Columbia University and was a member of the Education Committee of the United States Holocaust Memorial Museum in Washington D.C. from 1990 to 2004.

His most recent publications include War Crimes, Genocide, and Justice: A Global History (2014) Germany and China: Transnational Encounters since the 18th Century (2014), and Crimes of State, Past and Present: Government-Sponsored Atrocities and International Legal Responses (2011). Some of his earlier works include Oskar Schindler: The Untold Account of His Life, Wartime Activities, and the True Story Behind the List (2004), A History of the Gypsies of Eastern Europe and Russia (1994; 2007), The Baltic States and the Great Powers: Foreign Relations, 1938-1940 (1993), and The Gypsies of Eastern Europe (1991). His books have been translated and published in Chinese, Dutch, German, Japanese, Polish, and Ukrainian editions.

He is currently writing a biography of Raphael Lemkin, and editing a book on the evolution of Soviet law and justice in the 1920s and 1930s, and the impact of these developments on the role of the Soviets at the Nuremberg IMT trial.

His works have been featured in The New York Times, The Jerusalem Post,  Jűdische Allgemeine, The Times Literary Supplement, Der Tagesspiegel, Wprost, The Washington Post, Pravo, and other newspapers, magazines, and journals throughout Europe, North America, Israel, and Asia.

Dr. Crowe has testified before the United States Congress’ Commission on Security and Cooperation in Europe and the New York City Council’s Subcommittee on Immigration. He has served as an expert witness in scores of court cases in the United States and Canada involving the Roma, Russians and other ethnic groups. He has also appeared on CNN International, BBC Radio, CCTV, Fox News, Voice of America, and numerous television and radio programs throughout North America, Europe, Israel, and Asia.