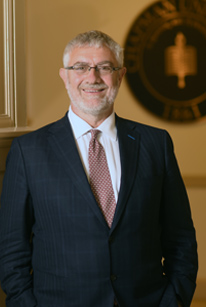 In 2006, the BIO-IT Coalition (a non-profit organization based in Washington, D.C., and dedicated to the support of bioinformatics) established a new prize in Dr. Struppa’s honor – the “Professor Daniele Struppa Award” – which is designed to honor high school teachers in math, science and technology.
In 2019, Dr. Struppa was granted the Donald Bren Presidential Chair in Mathematics. The chair, previously titled the Donald Bren Distinguished Chair in Business and Economics, was previously held by President Emeritus Jim Doti, Ph.D. In future years, the name of the endowed chair will be adapted to reflect the university president’s academic discipline.

Dr. Struppa is the author of more than 200 refereed publications, and he is the editor of several volumes. He has edited or co-authored more than ten books, including Bicomplex Holomorphic Functions (2015), Regular Functions of a Quaternionic Variable (2013), Noncommutative Functional Calculus: Theory and Applications of Slice Hyperholomorphic Functions (2011), Analysis of Dirac Systems and Computational Algebra (2004), Fundamentals of Algebraic Microlocal Analysis (1999), and The Fundamental Principle for Systems of Convolution Equations (1983).

While serving as chancellor, Dr. Struppa continued his scholarly research focusing on Fourier analysis and its applications to a variety of problems including the algebraic analysis of systems of differential equations, signal processing and pattern recognition. Some of his recent work applies these ideas and methods to problems ranging from denoising to bio-contaminant protection to proteomics of cancerous cells.