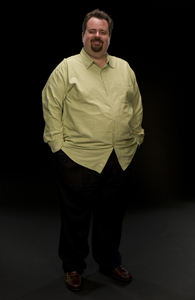 Like many a young man who dreams of becoming a rock star, Dan Leonard found film a good outlet for his creative energies in tandem with his love of all things technical. A music and sound engineering student at the University of New Haven, the never-sit-still Leonard took every sound-related course and then started in on film courses when he encountered the teacher who would change his life. When that teacher moved on to Florida State, Leonard followed, first as a student and then as faculty supervisor of the post-production facility. Along the way, he worked on both student and feature films, moving up through the ranks from gaffer, boom operator, and transportation captain to first assistant director. Although young in years, Leonard is rich in experience, having worked on some 13 features, including the black comedy Rose's, which won a rave review in Variety. Most recently, he's been editing special feature material for DVDs produced by Lion's Gate/Artisan Entertainment. "I love the sense of community on film sets," says Leonard, "there's nothing better than having a whole bunch of creative people come together for a creative purpose." Not a bad way to live. It might even beat rock stardom.