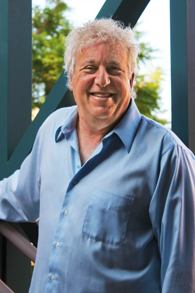 Barry W. Blaustein is the director and producer of the critically acclaimed documentary BEYOND THE MAT.  Proclaimed by the Los Angeles Times as one of the best films of the year, BEYOND THE MAT also was one of 12 finalists for Academy Award for Best Documentary, won numerous film festivals throughout the world as well as garnering a Director’s Guild nomination for Mr. Blaustein.   His latest documentary, GUYS ‘N DIVAS:  BATTLE OF THE HIGH SCHOOL MUSICALS, which followed three high schools competing to be invited to the International Thespian Festival, was produced by Lionsgate and Spitfire films, recently aired on Showtime.

Along with his writing partner David Sheffield, Barry Blaustein’s feature writing credits include COMING TO AMERICA, NUTTY PROFESSOR I and II, and BOOMERANG, on which they also served as co-producers.  As head writers and supervising producers on “Saturday Night Live”, Blaustein and Sheffield also wrote and developed many of Eddie Murphy’s more famous characters including Buckwheat, Velvet Jones, Gumby and Mr. Robinson.  They also co-wrote and produced “What’s Alan Watching” for CBS, which won the National Television Critics Award as best special of the year.

Co-wrote along with David Sheffield and Kenya Barris the film COMING2AMERICA. The film premiered on Amazon Prime on March 3, 2021 and has become the most streamed movie in the history of streaming.
Heavily featured in an article in Rolling Stone Magazine entitled "Shine Through: The Definitive Oral History of Soul Glo
COMING TO AMERICA, which I co wrote with David Sheffield, was named part of the permanent collection of the Smithsonian National Museum of African American History and Culture
Was honored and featured speaker at FAMU fest in Prague, I also taught a seminar on Screenwriting.
Produced, directed and appeared in 13 minute documentary for National Geographic Explorer TV series called KAYFABE,
Along with partner David Sheffield wrote sequel to COMING TO AMERICA entitled COMING 2 AMERICA. The film is scheduled to go into production in Spring 2018.