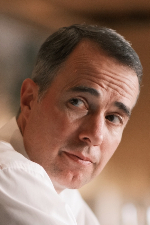 Professor Howell received his BS in Physics (1995) with a minor in Mathematics from Utah State University, and his MS and PhD in Physics (2000) from Pennsylvania State University. He then took a postdoctoral research position at the Centre for Quantum Computation at the University of Oxford. Professor Howell joined the University of Rochester in 2002 as Assistant Professor of Physics, and promoted to Associate Professor in 2007 and Professor in 2011. Howell received a Research Innovation Award from the Research Corporation in 2004, a Presidential Early Career Award for Scientists and Engineers in 2005, and the Adolph Lomb Medal from the Optical Society of America in 2006 "For innovative contributions in quantum optics, particularly aspects of quantum cloning, violations of Bell's inequalities and maximal photonic entanglement." He was the director for the Center for Coherence and Quantum Optics from 2013 to 2017. He was an appointed VP to the International Commission for Optics by Optics (ICO) and is now serving as President of the ICO. He joined the faculty of the Racah Institute at the Hebrew University in 2017 as a full professor, but has recently moved to the Physics Department at Chapman University. He has published approximately 100 papers and has approximately 8600 citations.