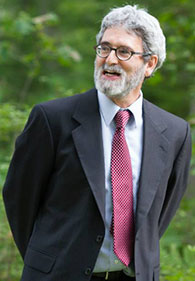 Richard Ruppel completed his undergraduate degree in Honors English and History at the University of Michigan (1976), and he earned an MA in English at Duke University (1978) and a PhD in English Literature at UNC Chapel Hill (1988). He has taught at UNC Chapel Hill, North Carolina State, and the University of Michigan; he came to Chapman in 2006 from Viterbo University in La Crosse, Wisconsin, where he was department chair and director of the Honors Program. His primary research interest is the work of Joseph Conrad; he's published books and essays and given numerous papers on various aspects of his work. His most recent publication, a monograph entitled A Political Genealogy of Joseph Conrad, appeared at the end of 2014.  He is at work on a book concerned with the intersection of literature and neuroscience.