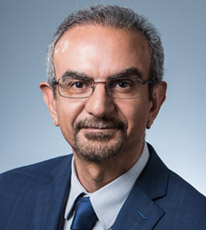 During his academic career, Dr. Mehvar has taught professional and graduate pharmacokinetics courses and conducted research in the areas of pharmacokinetics, pharmacodynamics, hepatobiliary disposition of xenobiotics, and pharmacokinetic-based targeted drug delivery approaches. His laboratory research, which has been published in more than 100 peer-reviewed articles, has been consistently supported by several grants from the National Institutes of Health, pharmaceutical industry, and state and local foundations and agencies. Additionally, he has published 20 peer-reviewed educational articles related to ability-based learning approaches, online tools for active learning in pharmacokinetics, and curricular outcome assessment strategies.

Dr. Mehvar has received several awards for both his teaching and research accomplishments, including multiple American Association of Colleges of Pharmacy (AACP) Innovation in Teaching Awards, Texas Tech University Health Sciences Center President’s Excellence in Research Award, Texas Tech University Health Sciences Center President’s Excellence in Teaching Award, and Texas Tech University System Chancellor’s Council Distinguished Teaching Award. In 2014, Dr. Mehvar was inducted into the Academy of the Pharmacology Educators of the American Society for Pharmacology and Experimental Therapeutics (ASPET). Additionally, Dr. Mehvar was a recipient of the inaugural AACP Distinguished Teaching Scholar Award in 2016, which recognizes excellence in academic pharmacy faculty engaged in and/or supporting scholarly teaching and the scholarship of teaching and learning.

Dr. Mehvar’s research is focused on the role of the liver in drug disposition and the pharmacological approaches to treat liver diseases. With regard to drug disposition, recent studies in his laboratory have focused on the inflammatory mediators, such as cytokines and nitric oxide, affecting cytochrome P450-mediated drug metabolism. As for the liver diseases, the focus has been on the reduction of rejection in liver transplantation and attenuation of cold and warm ischemia-reperfusion (IR) injury. The latter studies have resulted in the development of a novel dextran prodrug of methylprednisolone, which selectively accumulates in the liver, releasing the active drug for an extended period of time (> two weeks) and reducing the IR injury and graft rejection after transplantation in animal models. Very recently, his laboratory has focused on the effects of hepatic IR injury and other liver diseases on the transporter- and/or cytochrome P450-mediated hepatobiliary and brain disposition of drugs. In particular, his group is interested in investigating how liver diseases might affect the blood-brain barrier permeability and P450-mediated metabolism in the brain as they relate to neurologic complications observed after liver surgical procedures. Dr. Mehvar also conducts educational research related to ability-based learning approaches, online tools for active learning in pharmacokinetics, and curricular outcome assessment strategies.