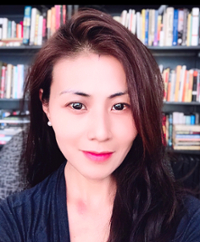 Rei Magosaki is a specialist in the field of twentieth- and twenty-first century American literature and culture.

Dr. Magosaki’s monograph, Tricksters and Cosmopolitans: Cross-Cultural Collaborations in Asian American Literary Production (Fordham UP, 2016), is the first sustained exploration into the history of cross-cultural collaborations between Asian American writers and their non-Asian American editors and publishers. The volume focuses on the literary production of the cosmopolitan subject, and features writers Sui Sin Far, Jessica Hagedorn, Karen Tei Yamashita, Monique Truong, and Min Jin Lee. A documentation of the dramatically changing publishing history from the late nineteenth century through the age of global capitalism, the book also reveals a range of negotiations between these authors and their publishers, between the shared investment in both politics and aesthetics which influenced the narrative structure of key works in major works of Asian American narrative fiction.

She writes in both English and in Japanese, and her scholarly essays have been published in the U.S., Japan, India, and elsewhere. She has written for Los Angeles Review of Books, and holds a regular column in Japanese at Sayusha, a literary press in Japan, entitled “Dispatches from Southern California: With Love from the Land of Sunshine”. Her developing interest in ecocriticism is reflected in an upcoming book chapter on the Japanese poet and scholar Keijiro Suga.

Dr. Magosaki was the recipient of Chapman University’s faculty grant for scholarly activity in 2011, 2012, and 2019. Her latest scholarly interest is on the literatures of the desert Southwest. On leave Spring 2021.