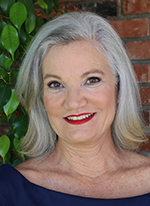 Rebecca Sherburn is the Director of Vocal Studies and an Associate Professor of Voice at Chapman University's Hall-Musco Conservatory of Music. Her scholarly work has been published in professional journals of the National Association of Teachers of Singing, the American Choral Directors Association, and the College Music Society.  A native Californian, she received her undergraduate degree from California State University—Los Angeles and her Master of Music and Doctor of Musical Arts degrees from the University of Southern California.

In addition to performing a vast amount of standard vocal repertoire, Rebecca Sherburn has distinguished herself as a champion of contemporary music. As a concert artist, she has premiered several works that were written specifically for her voice, and she has built a reputation for performing rarely heard contemporary chamber works.  In 2014 Paul Creston Songs was released by Albany Records. Dr. Sherburn’s work is the only comprehensive recording of Creston’s vocal opus. In 2017 Albany Records released a second CD titled Love, the Fair Day, a compilation of chamber music by composers of the Second New England School.

She was the winner of such competitions as the regional Metropolitan Opera National Council auditions, Annual Aspen Voice Competition, American Opera Awards, and the Viktor Fuchs Awards. She has received grants and awards from a number of national and international foundations for scholarly and creative work. These include two Faculty Research Grants from UMKC in the area of chamber music and performance grants from the Figtree Foundation, Blount Foundation, Opera Buffs of Southern California, and the Astral Foundation. During her years of training, she was an Apprentice at the Zürich Opera in Switzerland and Virginia Opera, a scholarship student at the Music Academy of the West, and a Chamber Music Fellow at the Aspen Music Festival.

Sherburn is particularly well-known for her vocal master classes which she gives throughout the nation. Her current and former students have won national and regional competitions, apprenticed at regional and national opera companies and taught voice on many levels, ranging from private studios and public schools to colleges and universities.