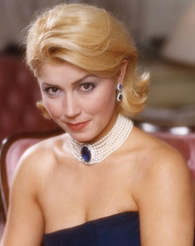 Milena Kitic, a renowned mezzo-soprano, has performed numerous roles with opera companies around the world throughout the last three decades.

She received numerous accolades for her performances, including the German Music Critic's Award for Performer of the Season in 1998 and the Opera Pacific Guild's Diva of the Year in 2005. The International Jeunesses Musicales Competition in Belgrade, Serbia, has established a special prize for "the best young mezzo-soprano" in Kitic's name.

Her talent and incredible career in music earned her the inaugural Artist-in-Residence Award given by Chapman University in Orange, California, where she is an adjunct professor and master class instructor. She also works closely with the Orange County High School of the Arts and many universities and music organizations in Southern California.

Kitic currently serves as chair of artistic excellence at LA Opera with whom she most recently performed the role of Carmen, Albine in Thais (with Placido Domingo), Mrs. Noah in Noah's Flood, and Suzuki in Madame Butterfly (both conducted by J. Conlon). Among other recent performances are her roles in Carmen and Amneris in Aida with the Pacific Symphony in Costa Mesa, CA, the grand opening concert of Chapman University's Musco Center for the Arts, the role of The Witch in Hansel and Gretel with the Symphonic Society of Orange County, and the Alto part in Mahler’s 8th Symphony with the Madison Symphony and Pacific Symphony Orchestras.

In the past year, Kitic has joined the Board of the Parnassus Society, which is committed to the growth of cultural advancement in Orange County, started mentoring students from Newport Harbor High School in opera and music, and was recognized by the Loren L. Zachary Society for the Performing Arts in Los Angeles for her work as a professional Opera Singer, Educator, and Contributor to the opera community.