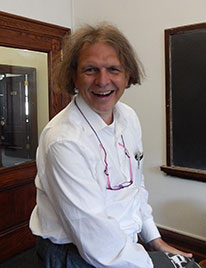 Marco Panza (Ph.D., University of Genova, Italy) is Presidential Fellow and Visiting Professor at Chapman University. Dr. Panza is Director of Research in History and Philosophy of Sciences at the National Center for Scientific Research (CNRS), attached to the University of Paris 1 Panthéon-Sorbonne. His current research focuses on areas in the history and philosophy of science, mathematics, and logic, including Descartes, Newton, the scientific revolution, Frege, and the origins of analytical philosophy. He is author of well over 100 articles and books, including Plato's Problem: An Introduction to Mathematical Platonism ( Palgrave-Macmillan, 2013); “The Varieties of Indispensability Arguments,” (Synthese 2016); and “The Twofold Role of Diagrams in Euclid's Plane Geometry” (Synthese 2012).