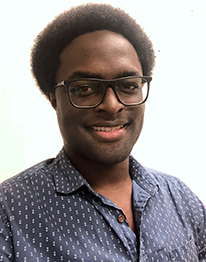 In 2018, Dr. Ogba joined Chapman University as an assistant professor of chemistry in Schmid College of Science and Technology. In this role, Dr. Ogba enjoys working with students in his computational chemistry research lab (The OMO Lab) to (i) study the underlying physical and chemical factors governing molecular structure, reaction mechanisms, and selectivity in organocatalyzed reactions, and (ii) to develop software and informatics tools for chemists to use to rapidly mine, analyze, and visualize chemical data. Dr. Ogba also enjoys teaching students the fundamental theories in organic chemistry, as well as applied work in computational chemistry, and cheminformatics.

When not staring into his laptop screen, Dr. Ogba can be found reading a fantastic piece of literary fiction, watching a theatre production, or dancing to live music in a concert hall. Some also say that his laughter can be heard across buildings(!) – more data points needed in this regard.

On February 18, 2019, Dr. Ogba was a guest speaker for Schmid College's Science on Tap Series.