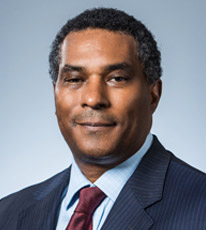 In addition to the degrees listed in the Education section above, Dr. Brown holds the following credential: FAPhA. Dr. Lawrence “LB” Brown is Associate Dean of Undergraduate Pharmacy Programs and Partnerships. In this role he directs the Freshman Early Assurance Program, and is responsible for establishing a BS in Pharmaceutical Sciences program. His previous roles were Vice-Provost for Academic Administration (2019-22) and Founding Associate Dean of Student and Academic Affairs (2013-19). He is also a tenured Full Professor in the school of pharmacy.

Dr. Brown’s career in pharmacy began as a U.S. Air Force pharmacy technician in 1985. After the Air Force, he worked in the Pharmacy Operations department as a pharmacy computer systems trainer and help desk tech for Kaiser Permanente Northern California. Since becoming a pharmacist, he has dedicated his career to the expansion of pharmacists’ roles within the health care system that improve patient health, and the improvement of patient’s perception of pharmacists. Dr. Brown is an International Expert in the area of Medication Therapy Management (MTM). In addition to his work promoting the value of pharmacists provided MTM services throughout the United States, he has traveled to South Africa, the Philippines, Sweden, and Hungary to help pharmacists in those countries become better prepared to provide MTM services to their citizens. He has given over 50 invited presentations internationally and over 80 throughout the United States.

Dr. Brown’s teaching and research interests include: the US Health Care system, professionalism and leadership, health disparities, and Health Care Reform; identifying the economic and clinical outcomes of pharmacists-provided Medication Therapy Management Services, expanded roles of pharmacists in the health care system, and consumer perception of pharmacists. Dr. Brown has served as an expert consultant to help pharmacists in Hungary, Philippines, and South Africa to become more knowledgeable about and more engaged in pharmacist-provided medication therapy management for patients. Additionally, he has created and delivers a small group education session that utilizes motivational interviewing to help patients improve medication adherence.