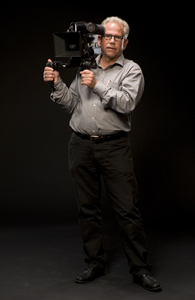 As a teacher, Jurg Walther wants his students to understand "the poetic potential that filmmaking has." Growing up in Europe in the '60s and '70s, cinematographer Walther was captured and "forever intrigued" by the level of self-expression in the films of Fellini, Bergman, and Antonioni.

"Filmmaking is about showing human emotion," he says, "about hope and compassion, and expressing the very fine points of human existence." The cinematographer, Walther says, faces the task of making the screenwriter's and/or director's concept and vision take form in the real, physical world.

Coming to the United States, where he studied at UCLA and A.F.I., Walther worked as director of photography and camera operator on a variety of feature films documentaries, music videos and commercial projects, which demanded that he produce a wide range of special effects, including shooting while skiing. But whatever the assignment demands, Walther is always seeking a better way to portray that internal reality, the one that the camera can reveal best, the very state of the soul.