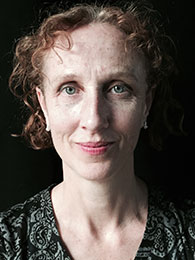 Julianne O’Brien has a background in the field of dance as a performer, choreographer, academic leader, and dance educator. She holds a Bachelor of Arts from Connecticut College, a Master of Fine Arts from the Ohio State University, and is certified yoga instructor and Laban/Bartenieff Movement Analyst.

Prior to joining Chapman University, she served as the Dean of the School of Dance at Dean College in Massachusetts and as program director and professor at Eastern Michigan University. She teaches modern techniques, pedagogy, dance history, career seminars, yoga, Bartenieff Fundamentals, Laban movement analysis, improvisation, and choreography.

Julianne performed as a founding member and soloist for fourteen years with the Peter Sparling Dance Company. While with Sparling, who was a member of both the Limon Company and the Graham Company, she had the opportunity to train deeply in two foundational modern techniques. She has also had the privilege of performing with William (Bill) Evans, and in repertory by Isadora Duncan set by Lori Bellilove. She has choreographed more than fifty works that have been seen in venues across the states and in El Salvador and received numerous grants and awards for choreography including funding from the US Embassy in El Salvador, and selection for the 2016 American College Regional Dance Festival.

An interest in K-12 movement integration curriculum has spanned two decades: receiving multiple grants from the Michigan Association for the Education of Young Children to work with under-served K-3 students in science and history classes; developing math in motion curriculum with the Malashock Dance School in San Diego, CA; multiple year teaching residencies with Malashock and Freese elementary school; and spear-heading movement curriculum into the Franklin, MA public schools in partnership with college internship programs.