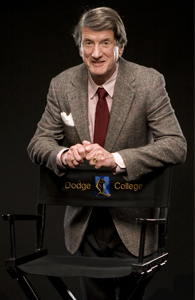 Everyone should have a poster over their desk: "Character, character, character."  So says John Badham, who has directed more than 39 feature-length productions and many television shows over a career that has earned him Academy Award nominations, international box office success and helped launch John Travolta as a major star.

Whatever the story—he has directed everything from action films (Point of No Return, Blue Thunder) to comedies (Short Circuit, WarGames) and dramas (Whose Life Is It Anyway?, American Flyers)—Badham always keeps his focus on character.

The core of the director's job, he says, is to "get inside a character and understand."  Thus he attributes much of the worldwide success and longevity of Saturday Night Fever to the fact that "I understood what was going on in those kids' hearts, even though I'd never been in Brooklyn—I grew up in Alabama."

"If you get the characters right, everything else falls into place," he says.  From there, the challenge is to work with actors to make the story come to life.  "Every actor has to be directed differently from every other actor," Badham advises.  "You have to make the set a comfortable place to be where it's okay to fail."