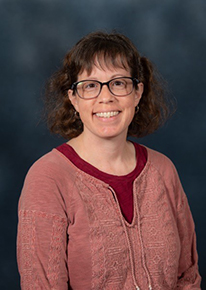 Dr. Jessica Sternfeld, musicologist, joined the faculty of Chapman University in 2009, and is now Associate Professor of Music.  Her work with students, whether music majors, grad students, or non-majors, focuses on grounding each musical piece in its context, exploring not only the music but its meaning, audience, and cultural significance.  Her courses include the Baroque, Classical, Romantic, and Modern eras of Western art music; musical theater on stage, film, and TV; opera; American popular song; and political and social movements in music.  Besides teaching music history and culture, Dr. Sternfeld also serves as the Director of Student Affairs in the Hall-Musco Conservatory of Music; in that capacity, she advises all music majors and minors on courses and career paths.  She especially enjoys teaching music history and culture courses to music majors, and working with first-year students to learn about critical inquiry via musical theater in her FFC.

Dr. Sternfeld is very active in Chapman’s efforts to increase and improve diversity and inclusion on campus, serving on the university-wide Diversity Response Committee among other committees.  She is a proud “Safe Space”-trained faculty member and works to improve the atmosphere of safety and inclusion for all Chapman community members.

Originally from the east coast, Dr. Sternfeld earned a B.A. with Honors in Music from Wesleyan University, and an M.A. and Ph.D. in musicology from Princeton University in 2002.

Her first book, The Megamusical (2006, Indiana University Press), is the first to explore the phenomenon of the blockbuster musicals of the last forty years.  It discusses both the internal workings and the cultural impact of these “megamusicals.”  She has published numerous scholarly articles and chapters on musical theater, including a chapter on revivals, films, and television productions for the Cambridge Companion to the Musical (2008/2017, ed. Laird and Everett) and a chapter on disability in The Phantom of the Opera for the groundbreaking Oxford Handbook of Music and Disability Studies (2015, ed. Straus et al).  A chapter on the TV series Glee appears in Gestures of Music Theatre:  The Performativity of Song and Dance (Oxford 2013, ed. Symonds and Taylor).  Other articles have appeared in journals such as Studies in Musical Theatre, for which she has also served as guest editor.  She has given talks at numerous national and international conferences, including Song Stage & Screen, the Society for American Music, the American Musicological Society, the International Association for the Study of Popular Music, and the College Music Society.

Her current work focuses on how trauma is portrayed in musicals.  The “trauma narrative” in contemporary society, as seen in films, TV shows, talk shows, and self-help materials, rests on the notion of a trauma victim who testifies and thus is healed.  Dr. Sternfeld’s forthcoming monograph (Oxford University Press, due out 2020) “Words Fail”: Trauma and the Musical explores how this narrative plays out on stage, with investigations of what trauma looks and sounds like, and how shows obey or thwart the current cultural expectation.

She is also at work on a large essay collection with co-editor Dr. Elizabeth Wollman, The Routledge Companion to the Contemporary Musical, forthcoming in 2019.  This collection brings together dozens of leading and rising scholars across many fields, approaching recent musicals from a range of scholarly fields.  This is the first collection focusing on recent and current productions, and includes essays on stage, film, and TV musicals with lenses ranging from economics, politics, and aesthetics to new media, gender, race, and class.  This collection will serve scholars as well as classrooms, as it is designed to be accessible to undergrads and those new to the scholarly field of musical theater.

Jessica Sternfeld and Elizabeth Wollman, eds. The Routledge Companion to the Contemporary Musical. Routledge: 2019.
“Cameron Mackintosh,” a chapter for the book _The Palgrave Handbook to Musical Theater Producers_, ed. William Everett and Laura MacDonald, Palgrave Press, 2017
“'Pitiful Creature of Darkness’: The Subhuman and the Superhuman in The Phantom of the Opera,” a chapter in the _Oxford Handbook of Music and Disability Studies_, ed. Blake Howe, Stephanie Jensen-Moulton, Neil Lerner, and Joseph Straus, Oxford University Press, 2015.
Co-authored with Scott Stone, then Chapman Performing Arts Librarian, "Music Librarian and Faculty Collaboration: How an Historiography Assignment Improved a Music History Class," in _Music Reference Services Quarterly (Vol. 17 no. 1, 2014)
"Everything's Coming Up Kurt: The Broadway Song in Glee," a chapter for _Gestures of Music Theatre: The Performativity of Song and Dance_, edited by Dominic Symonds and Millie Taylor, Oxford University Press, 2013.