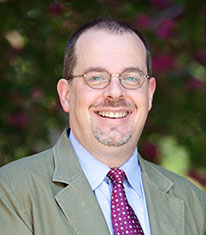 Jeff Koerber is an Assistant Professor of History, teaching undergraduate courses in Holocaust history. He holds a Ph.D. in Holocaust History from Clark University, as well as bachelor’s and master’s degrees in architecture from the University of Illinois. Dr. Koerber has published widely on historic architecture and building preservation. His work on historic structures and sites has prompted his research into the relationships linking place, historical actors, and events. These inquiries formed the basis of his doctoral research on the survival of young Jews in the borderlands of the Soviet Union and Poland during the Holocaust. He is developing his dissertation into a book manuscript under the title Borderland Generation: Soviet and Polish Jews under Hitler. His research has been supported by fellowships from Claims Conference, USC Shoah Foundation Institute, Holocaust Educational Foundation, Tauber Institute for the Study of European Jewry, and Fulbright. Dr. Koerber has reading skills in Yiddish, German, Russian, and Belorussian.

Borderland Generation: Soviet and Polish Jews under Hitler. Syracuse University Press, 2020. Finalist for the Wiener Holocaust Library Ernst Fraenkel Prize for 2019.
“Autobiographies of Jewish Youth in Prewar Poland as Holocaust Sources.” In Agency in the Holocaust and Genocide: Essays in Honor of Debórah Dwork, edited by Thomas Kühne and Mary Jane Rein. Palgrave Macmillan, 2020.
“What Did Soviet Jews Make of Kristallnacht? The Nazi Threat in the Soviet Press.” In New Perspectives on Kristallnacht: After 80 Years, the Nazi Pogrom in Global Comparison, edited by Wolf Gruner and Steven J. Ross. Purdue University Press, 2019.