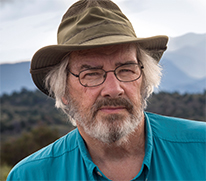 John R. "Jack" Horner was born and raised in Shelby, Montana, and attended the University of Montana for seven years majoring in geology and zoology.  Although never completing a formal degree, the University of Montana awarded him an honorary doctorate of Science in 1986.  Also in 1986 he was awarded a MacArthur Fellowship.  Until June of 2016 when he retired from Montana State University in Bozeman, Montana, Jack was Regent’s Professor of Paleontology in the Department of Earth Sciences, and Curator of Paleontology at the Museum of the Rockies.  Jack studies dinosaur growth, behavior and evolution. Jack has published more than 100 professional papers, 9 popular books, and more than 100 popular articles.  Jack was the technical advisor for all the Jurassic Park movies, and was Michael Crichton’s basis for the Alan Grant character. Jack lectures on dinosaurs, evolution and dyslexia.  He lives in Bozeman.