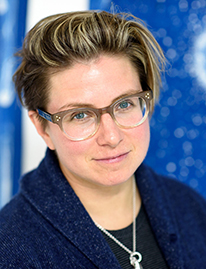 Lia Halloran received her BA in Art from UCLA in 1999 and continued to take astronomy class while pursuing her MFA Painting in Printmaking at Yale in 2001. Halloran’s work often uses concepts in science as a bounding point for her work, exploring how perception, time, and scale informs the human desire to understand the world and our emotional and psychological place within it. Halloran has participated in several interdisciplinary projects with a variety of collaborators to curate exhibitions, write on art and science intersections and experiment with new media technologies. Solo exhibitions of her artwork have been held at venues in New York at DCKT Contemporary, Fredric Snitzer in Miami, FL, La Montagne Gallery in Boston, Sandroni Rey in Los Angeles, Artisphere, Arlington Virginia, Martha Otero Gallery in Los Angeles, Pulse in London, England,  Hilger NEXT in Vienna, Austria and most recently at SACI in Florence, Italy. Her work has been acquired by the Solomon R. Guggenheim Museum New York, The Speyer Family Collection, New York, The Progressive Art Collection, Cleveland and the Art Museum of South Texas. Her work has been featured in publications including The New York Times, The New Yorker, The Boston Globe, The Los Angeles Times, ArtNews, and New York Magazine among others. Halloran has recently been awarded National Endowment for the Arts, Art Works for Visual Arts grant ‘Your Body is A Space That Sees’ about the historical contribution of women in astronomy and opening at Caltech in June of 2016 will be an exhibition tilted ‘Deep Sky Companion’ consisting of over 110 separate works cataloging the night sky. Lia Halloran lives and works in Los Angeles and currently serves as Assistant Professor of Art and Director of Painting and Drawing at Chapman University where she also teaches courses that look at how creativity and problem solving can be the point of intersection for art and science.